You are using an out of date browser. It may not display this or other websites correctly.
You should upgrade or use an alternative browser.

A half-century of quarter-mile coverage 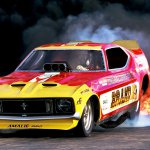 (Editor’s note: During the month of April — and extending into early May — the Journal has presented a series of stories about vintage rallies and vintage racing. Today, Howard Koby reflects on 50 years of covering drag racing, and the growth of nostalgic or vintage drag racing events. While the series might conclude, if you have a story about your participation in a vintage rally or vintage racing that you’d like to share, please email us at journal@classiccars.com.)

Having studied advertising and editorial photography at the Art Center College of Design in California, I had no inkling when I graduated that I would wind up slightly obsessed with drag racing a few years later.

I was always into cars growing up in Brooklyn, New York, and could name most cars just by their taillight design.

One of the advertising agencies in Los Angeles that I was freelancing for had signed a new client that produced car care products called “Blue Max.” I was assigned to photograph the product at the Chino Airport with an old biplane from World War I and a model dressed in a military Blue Max uniform. 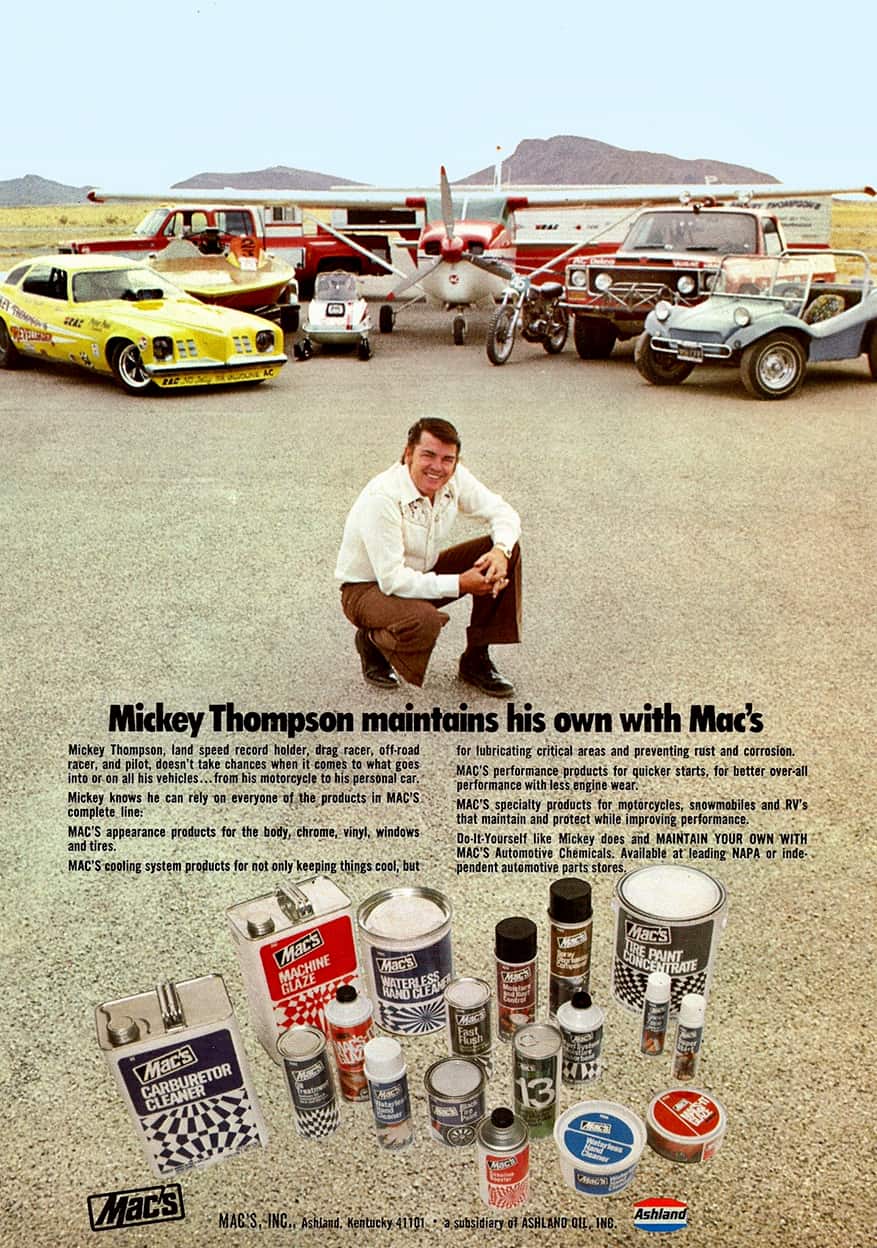 Also being advertised were Mac’s car care products, somehow related to Valvoline Oil Company, a brand of Ashland Chemical Co. It was arranged for speed record-holder Mickey Thompson to endorse Mac’s products, and we asked Thompson if he could display some of his racing vehicles for a photo session out in the high desert.

Unbelievably, he showed up with his Funny Car, a dune buggy, a snowmobile, a motorcycle, an airplane, an off-road truck, a boat and an RV.

I grouped the vehicles on the desert floor with the mountains in the background and with Thompson in the foreground.

Valvoline was so happy with the shoot that it asked if I could go to the drag races at Orange County International Raceway to photograph the cars it sponsored.

The agency also picked up Cyclone Headers as a new client and so I was to photograph the racers using that product at Orange County.

So there I was at the drag races shooting fast moving objects and utilizing my years of study at Art Center to portray motion and power at its height.

I sold my first photo, from the Manufacturers Funny Car Meet, to Bob Petersen, founder of Hot Rod Magazine, in 1972, and I was hooked.

The long smoky burnouts, the sweet smell of nitro with tears in everyone’s eyes, the earsplitting rattle from the 2,500-horsepower Hemis, the ground pounding motion, and the fans cheering uncontrollably from the stands was addicting. Every weekend I would truck down to Orange County or Irwindale or Pomona and Lions and get home with streaks of burnout rubber all over my face. I couldn’t get enough. It became chronic. I began selling photos to all the major car magazines and even did a lengthy story on drag racing for the Robb Report. 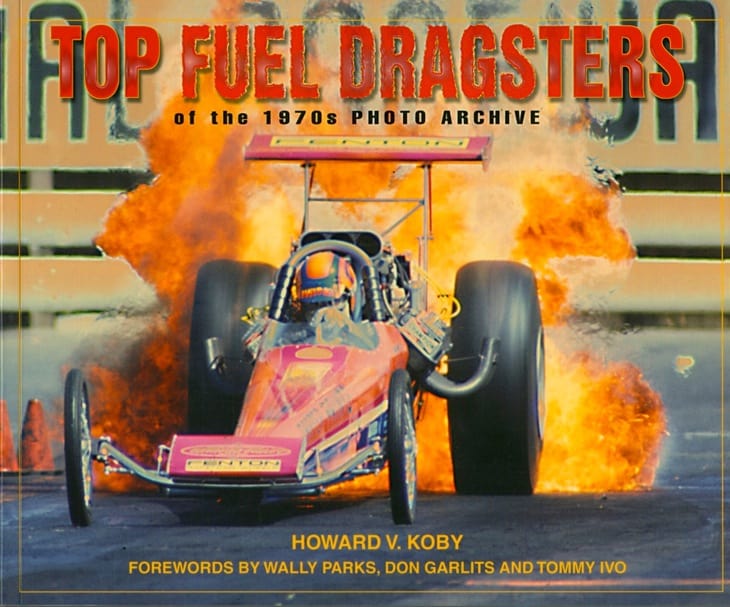 In the mid-1970s, Hot Rod Magazine asked me to put together a series of racing photography for a four-page portfolio layout. That gave me the additional confidence that an artist needs to create even more thought-provoking work. I continued with advertising photography in my LA studio but started taking on automotive parts clients and that led me to cover motorcycle motocross and other types of car racing, including Can-Am, NASCAR, Indy cars, off-road and Formula 1. At this point I also starting writing about the events and was able to deliver to magazines a complete package.

Perhaps the highlight of my years of drag racing photography came when a friend and fellow photographer Lou Hart told me of a publishing company back east that was interested in producing a book on Top Fuel drag racing in the 1970s. I showed some samples shots and received a contract and an advance to compile about 125 images for a book on slingshots of the ‘70s. It was basically a photo archive with detailed captions. The cover image showed “Wild Bill” Carter doing a Top Fuel fire burnout at Orange County.

Every author wants an icon to write a book’s foreword so I was going to do something a little different. I thought of the most influential icons in drag racing — Wally Parks, father of the NHRA, racing legend “Big Daddy” Don Garlits, and the showman himself “TV Tommy” Ivo. It took nine months to get all three to write forewords and I cherish a copy of the book signed by all of them.

Top Fuel Dragsters of the 1970s did very well so the publisher asked me if I would do another book. Of course, so for the next 10 months I organized Pro Stock Dragsters of the 1970s with “Dandy Dick” Landy on the cover driving his 1973 championship-winning Hemi Dodge Dart at Orange County. Landy always had a cigar in his mouth (even on the cover), but never smoked it. He told me he would go through a box of cigars every week just choppin’ on them. 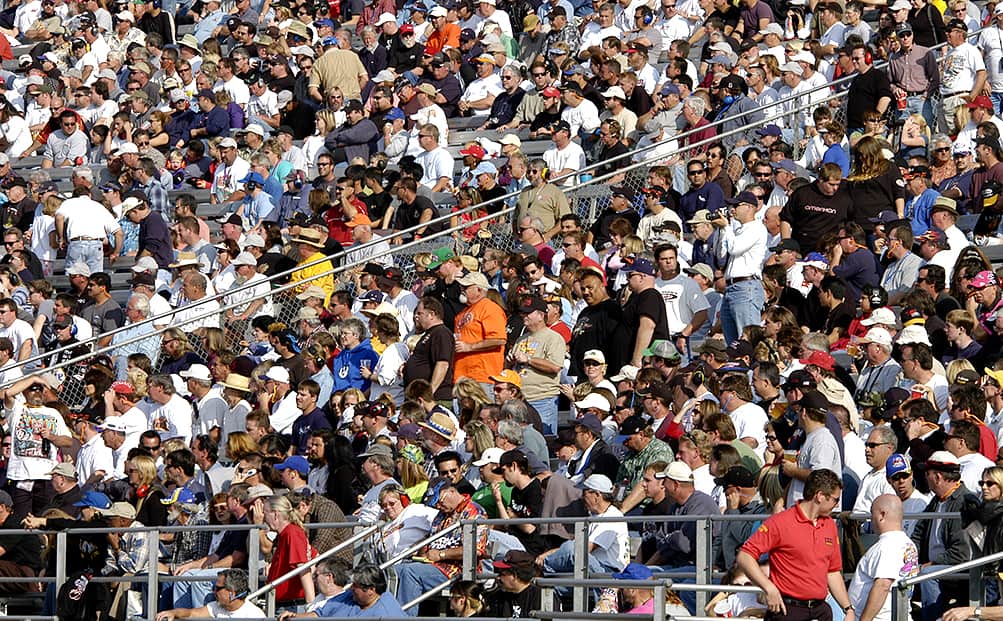 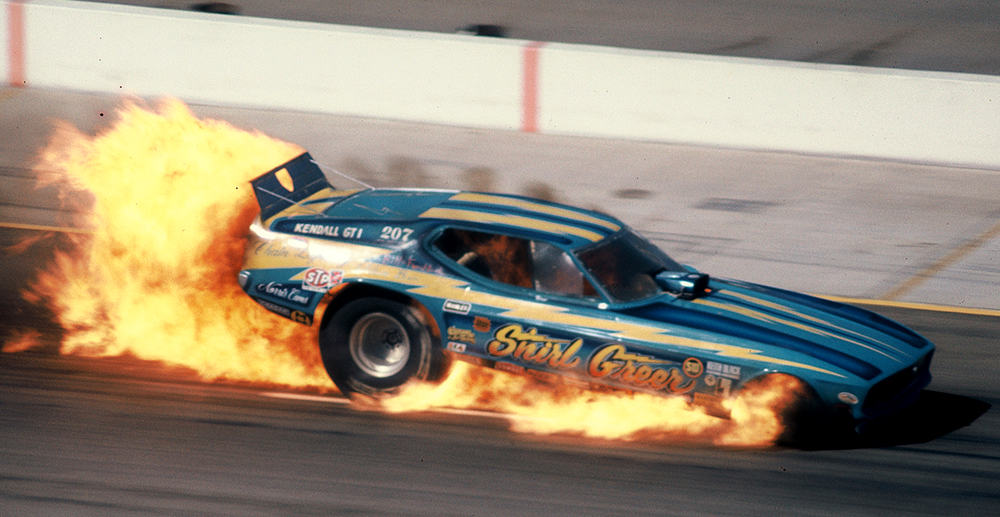 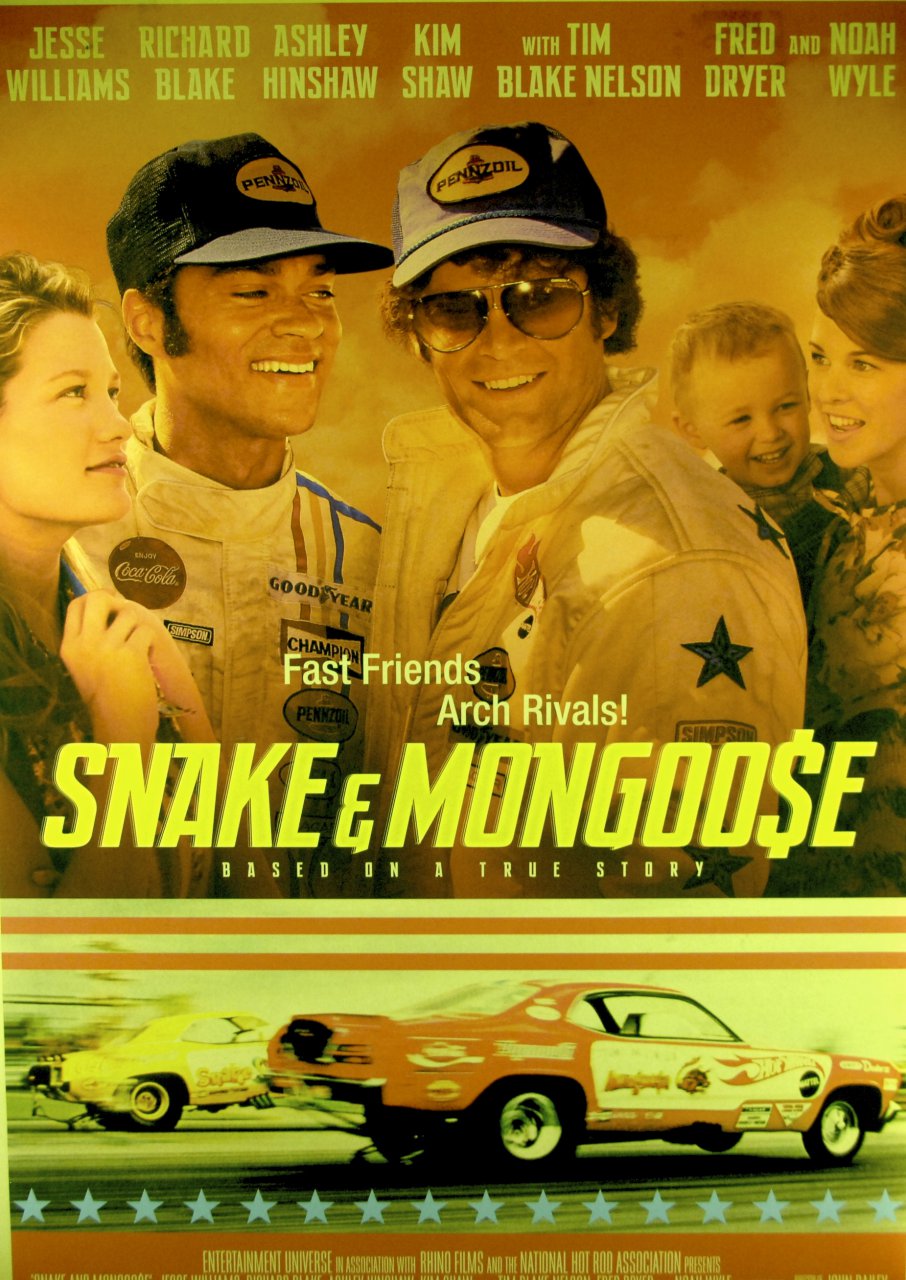 Snake v. Mongoose became so popular a movie was made

During the 1970s and ‘80s the big drag racing rivalry was Don ‘The Snake” Prudhomme and Tom “The Mongoose” McEwen. McEwen, being a savvy business type, talked the Mattel Toy Company into backing a pair of Funny Cars with Hot Wheels sponsorship. The program became a major marketing marvel.

Prudhomme ran a 1970 Plymouth Barracuda Funny Car against McEwen’s Dodge Duster. Prudhomme got his nickname for his slinky stature and the way he uncoiled his car on the green at the starting line. Prudhomme once said, “If we can send a guy to the moon we can certainly go a quarter of a mile and not get hurt.”

McEwen took his nickname from the only animal capable of dealing with a cobra.

The sport reached new levels of exposure as showmanship and professionalism found new heights in drag racing. Prudhomme was the first to break the 6-second barrier and the first to run over 250 mph.

It wasn’t until 1992 that Kenny Bernstein broke the 300-mph barrier, hitting 301.70 mph in 4.823 seconds in his Budweiser King Top Fuel dragster at the Gator nationals in Florida. Brittany Force, daughter of multiple Funny Car champion John Force, holds the national record in Top Fuel at 338.17 mph in 3.659 seconds. Unbelievable! 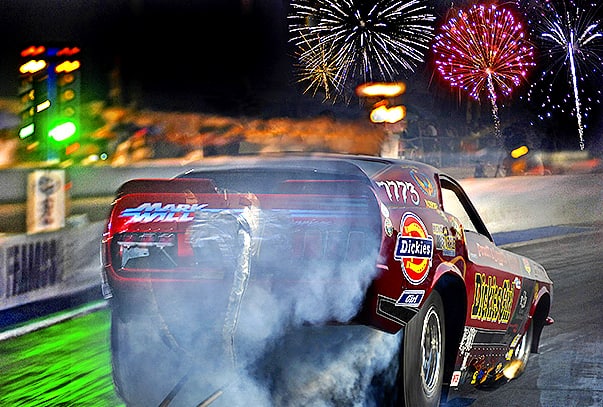 In the last twenty years or so, nostalgic or vintage drag racing events have become very popular, especially to the many Baby Boomers and “geezers” who grew up with the sport. The March Meet (known as the Woodstock of drag racing) and the California Hot Rod Reunion (a three-day festival of speed), both held in Bakersfield, bring the best of the past to today.

Steve Gibbs, the first director of the Wally Parks NHRA Motorsports Museum and the “Pied Piper” of nostalgic drag racing, has created the fantastic “Nitro Revival” series, a special gathering of vintage and restored nitromethane-powered drag cars from the early days for a step back in time. The next Revival is scheduled for November 6-7 if COVID-19 doesn’t interfere.